Tsukiji Hongwanji is a Buddhist temple belonging to the Jodo Shinshu Hongwanji-ha denomination, also known as Shin Buddhism, which was founded by the monk Shinran (1173-1263) and whose head temple is Hongwanji (Nishi Hongwanji) in Kyoto. The temple was first built near Asakusa, but was burnt down in a fire in 1657 and rebuilt at its current location in 1679. At that time, the area where the temple stands now was the sea. Temple followers and others implemented a land reclamation project and rebuilt the temple on the new land. In 1923, the temple was again destroyed by fire caused by the Great Kanto earthquake, and, in 1934, the current Hondo (main worship hall) was rebuilt according to a design by renowned architect Ito Chuta. In 2014, the temple’s main worship hall, gate posts (Main gate, North gate, and South gate), and stone walls were designated as National Important Cultural Properties. “Tsukiji” means “reclaimed land” and signifies the origins of the site on which the temple stands.

Tsukiji Hongwanji’s structure is modeled after ancient Buddhist architecture found in India and other Asian countries and was designed by architect Ito Chuta, who was also involved in the joint design of projects such as Heian Jingu Shrine in Kyoto and Meiji Jingu Shrine in Tokyo’s Harajuku. Ito was famous for his love of “yokai,” a term used to describe traditional Japanese monsters, and the temple is decorated with several carvings of creatures. They include winged lions, oxen, horses, shishi lion dogs, elephants, peacocks, monkeys, Chinese phoenixes, and exotic and strange figures called “grotesques”. In addition, depictions of four legendary Chinese animals: Blue Dragon, Red Peacock, White Tiger, and Black Tortoise are hidden inside.
The temple’s roundish roof is modeled after the leaf of the sacred Bodhi tree. A lotus flower is depicted in the center of the facade. A large pipe organ has been installed inside the main worship hall, and stained glass can be seen above the temple door. These, too, are architectural features unique to the temple. Visitors are encouraged to come experience the distinctive temple architecture which only Ito Chuta, who extensively traveled the Silk Road, could create. 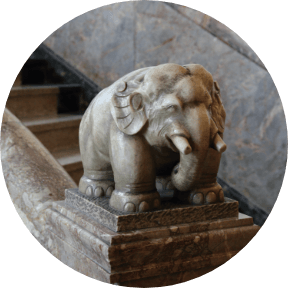 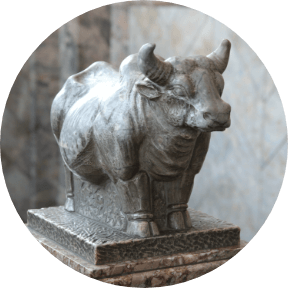 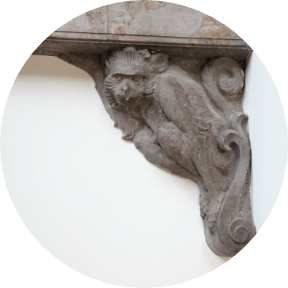 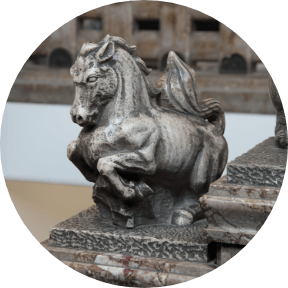 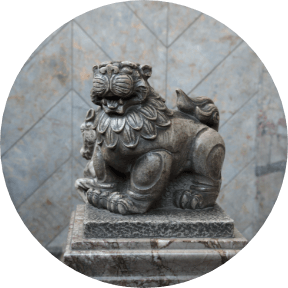 Tsukiji Hongwanji is lit up daily from sunset until around 9:00 p.m. Come experience the
unique atmosphere of the temple and its grounds at night

First, stand a step away from the incense burner and bow lightly.
Next, take a very small pinch of incense and sprinkle it into the burner.
Put your palms together, bow forward, and recite “Namo Amida Butsu.”
This recitation means “I entrust myself to Amida Buddha.”
Finally, bow deeply, take a step back, and bow once more lightly. 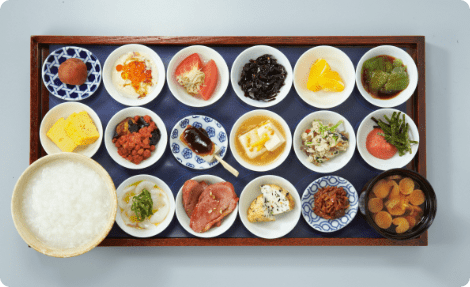 In this brightly-lit lounge adorned with floor-to-ceiling windows, enjoy coffee, black tea, and other drinks; light foods such as toast and sandwiches; and desserts like anmitsu (agar jelly served with anko bean jam and fruit, and topped with syrup and ice cream). Shisui serves traditional Japanese shojin ryori (vegetarian Buddhist cuisine) whose recipes have been handed down since ancient times, gozen meals made with fresh ingredients stocked straight from the market, and the temple’s famous monzen soba noodles. Serving as the temple’s bookstore, here you can find a wide variety of books, from essays and primers for the Buddhist novice, to specialized texts for the devout. This shop carries Buddhist items and exclusive Tsukiji Hongwanji merchandise such as stationery and knickknacks. Every day from 7:00 a.m. and 4:00 p.m.
The temple holds a morning and an evening service daily. Services start with the ringing of a bell called the kansho. During the morning service, a priest delivers a sermon. 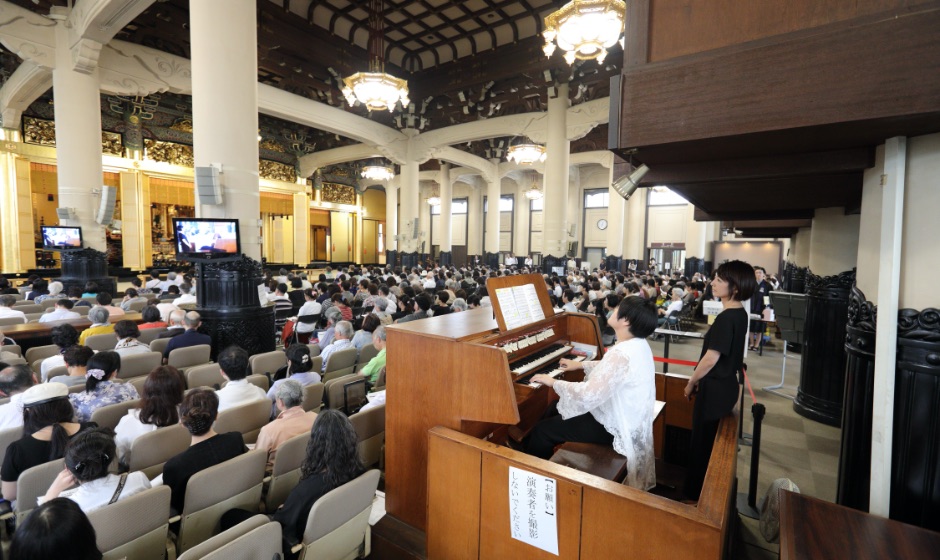 Last Friday of the month, from 12:10 p.m.
Enjoy performances of classical and Buddhist music played by an ensemble of various instruments, including a pipe organ made by the German Walcker company which was donated to the temple in 1970 by the Society for the Promotion of Buddhism (Bukkyo Dendo Kyokai). Last Saturday of the month, from 5:30 p.m.
During this service, sermons on Buddhism are conducted in English. Even highly technical terms are explained in easy-to-understand English. A fellowship is held after the service where participants can also enjoy meeting and talking with each other over refreshments.
Click here for the annual schedule Held irregularly
Gagaku is a traditional style of music performed using stringed, percussion, and wind instruments which were introduced to Japan from China. Gagaku is performed in Japan at the imperial court, Buddhist temples, and Shinto shrines. Gagaku performances at Tsukiji Hongwanji are accompanied by displays of traditional dancing. In addition to these special performances, you can also hear gagaku being performed at Tsukiji Hongwanji during memorial services such as the Ho-onko service memorializing the founder of Shin Buddhism. January 1, from 6:30 a.m.
A service is held in the main worship hall to welcome in the new year. Mikan oranges and large pounded mochi rice cakes, called kagami mochi, are offered to Amida Buddha. Many people come to Tsukiji Hongwanji to make their first temple visit of the year and form a line to make an offering at the incense burner. Mid-January
In Japan, it is customary to celebrate being deemed an adult at the age of 20. During the ceremony, those who have turned or will turn 20 between April 1 of the previous year and March 31 of the current year stand in front of Amida Buddha to give thanks for the growth and development they have made, and to make a renewed vow to treasure their lives moving forward. 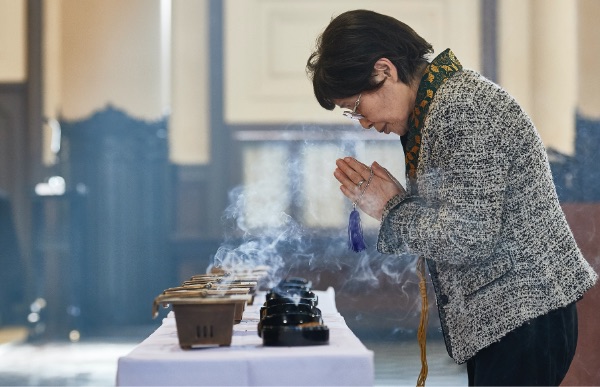 March 11, from 2:46 p.m.
This memorial service is held to pay tribute to those who lost their lives in the Great East Japan Earthquake which occurred on March 11, 2011; and to hope for the continued restoration and reconstruction of areas struck by the disaster. Late March and late September
These services are held while bearing in mind the Pure Land (the land of Amitabha Buddha), which lies in the west, for approximately one week around the dates of the spring and fall equinoxes when the sun sets due west. Early April
April 8 is the birthday of Sakyamuni Buddha, the founder of Buddhism. Tsukiji Hongwanji holds a Hana Matsuri service to celebrate Sakyamuni Buddha’s birth on a Sunday near April 8. May 21
May 21 is the date of the birth of Shinran, the founder of Shin Buddhism. A service is held to celebrate his birth, a tea ceremony is conducted in the main worship hall, and traditional gagaku music is performed. July 13–16
This memorial service is derived from the Ullambana Sutra. By remembering one’s ancestors, we celebrate the fact that, through generations of relationships and connections, we are able to encounter the teachings of Shin Buddhism; and listen to the teachings of the Buddha. Late July–early August (four days)
As Tsukiji’s summer tradition, a huge tower called a yagura is erected on the grounds of Tsukiji Hongwanji and large numbers of people come to dance around it. During the festival, some of Tsukiji’s most well-known restaurants and food companies set up food stands, and it is also known as “the most delicious Bon Dance in Japan.” November 11–16
January 16 is the date of the death of Shinran, the founder of Shin Buddhism. Tsukiji Hongwanji holds its Ho-onko services in November in order to avoid overlapping with the Ho-onko services held at the Hongwanji, the head temple of the Jodo Shinshu Hongwanji-ha denomination in Kyoto from January 9 to 16. The Ho-onko services are the most important service conducted in Shin Buddhism and memorializes the virtues of Shinran. The impressive event includes Buddhist chants and gagaku music performances conducted by large numbers of people. December
December 8 is the date that is considered to be the day when Sakyamuni Buddha, founder of Buddhism, attained enlightenment (became a Buddha). In commemoration of Sakyamuni Buddha’s attainment of enlightenment, several priests take turns to give sermons in Tsukiji Hongwanji’s main worship hall. 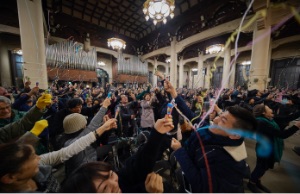 December 31
This service is held in the main worship hall to let us reflect on the passing year. Visitors may enter Tsukiji Hongwanji’s bell tower, normally closed to the general public, and ring the traditional New Year’s Eve bell. Additional events include a countdown, pipe organ and traditional gagaku music performances conducted in the main worship hall, comedic performances conducted by priests, and the handing out of free cups of amazake (sweet low-alcohol sake).

6:00am to 4:00pm(the main door will be closed after the evening service)